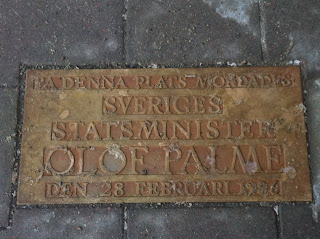 This Monday (February 28th) is the 25th anniversary of the assassination of Swedish Prime Minister Olof Palme. He was fatally shot while walking home from a movie theater with his wife. His assassination came as quite a shock to Swedes and the world as well. Sweden was viewed as a very safe place, synonymous with peace, prosperity and neutrality, and security was never an issue for Swedish politicians... the couple had no bodyguards with them that evening. Despite several witnesses, including his wife, his murder has never been solved and the assassination has become almost Kennedy-esque in nature. Palme had many enemies: he was a vocal critic of US involvement in Vietnam, Soviet brutality in Prague, apartheid in South Africa and the Franco regime. So it is perhaps not strange that conspiratorial theories abound concerning CIA, KGB and even South African operatives. 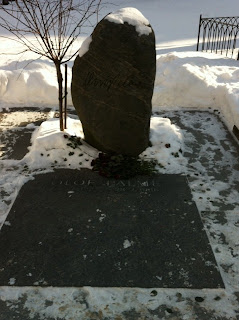 If you are a history buff, or would like to pay your respects to this Swedish politician, then there are a couple of memorials in the city you can visit. At the place where he was shot, on the corner of Sveavägen and Tunnelgatan (renamed Olof Palme's Gata in his honor), is a plaque commemorating the event... and people often lay flowers here. Olof Palme's grave is located just two blocks up the street at the church Adolf Fredriks kyrka. 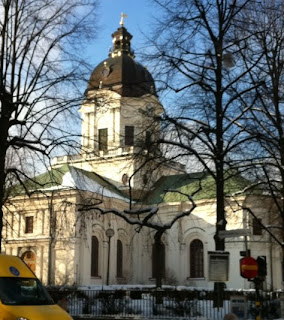 Trivia: In the church there is also a memorial to the French philosopher René Descartes ("cogito ergo sum/I think therefore I am") who was actually buried here for a time before his body was moved to Paris. He had died in Stockholm while visiting the city at the invitation of Queen Christina to be her teacher.
Email Post
Labels: event history trivia