Advisory: Sightseeing by Boat This Fall

This Fall they are continuing the renovations to the Strömkajen boat dock in front of the Grand Hotel. This means that Strömma's two boat sightseeing tours, Under the Bridges and Royal Canal Tour, start at the Nybroplan boat dock instead. Strömkajen is planned to be open again by Spring, 2013... just in time for the Summer season. To get to Nybroplan from the Rival Hotel, take the subway (red line) to Östermalmstorg and from there it is a five minute walk to the dock.
I had to also post this picture (see below) that I took the other day... a slice of Stockholm. It was about 12 degrees Celsius and this man was shooting the rapids in front of the Royal Palace (in short sleeves!). Crazy person or dedicated sportsman? You decide... 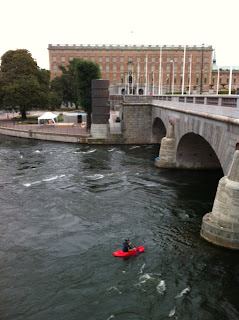