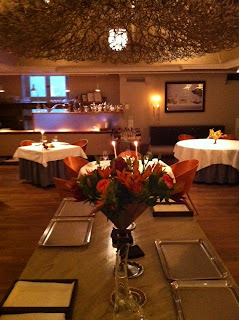 Yesterday evening I had the opportunity to try Esperanto's new menu "Carte Orientale". Esperanto is one of Stockholm's best restaurants and has, over the past 6 years, racked up the awards... including a Michelin star (since 2007) and third place ranking for Swedish restaurants in White Guide this year. (Edit: Esperanto nabbed the first place ranking this year- 2013!) 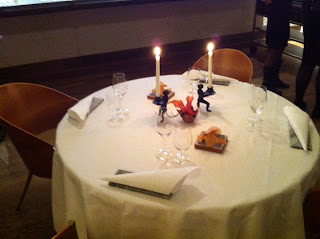 While they do offer a multiple course tasting menu based on the season, their Carte Orientale menu is made up of medium sized dishes, allowing diners to compose their own meal. Esperanto also runs a very popular sushi restaurant called Råkultur (raw culture) which is located on the ground floor of the same building as the restaurant. They have taken inspiration from Råkultur when creating Carte Orientale. You will find tastes of Japan in each of the dishes on the menu, like pickled daikon, wasabi, miso and udon noodles. The menu doesn't feel Japanese at all, instead they are combined with other menu components for intriguing and delicious taste combinations. Don't miss the red beet ice cream and licorice meringue dessert... to die for!
Esperanto is located in the downtown area and the easiest way to get there from the Rival Hotel is either by taxi (10 minutes) or subway (green line from Slussen to Rådmansgatan). Esperanto isn't large so prebooking a table is definitely recommended!
Sidenote: The newspaper DN agrees with me. They recently wrote a review and gave it a 5 out of 5.