Den Gyldene Freden means "the golden peace" and refers to the Peace of Nystad, signed by Sweden and Russia (ending the Great Northern War) in 1721. Why name a restaurant after an almost 300 year old peace treaty? Well... that's how old the restaurant is! Den Gyldene Freden, according to the Guinness Book of Records, is the world's oldest restaurant still in the same locale... and most of the interior has been unaltered since the restaurant opened in 1722. 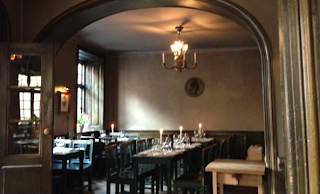 The restaurant has been the haunt of many cultural figures, like Carl Michael Bellman, Cornelis Vreeswijk and Anders Zorn, through the centuries... and was often named in their songs and poems. These days the Swedish Academy, which chooses the annual Nobel Prize in Literature, meets here for their weekly Thursday dinner. All of this history has made Gyldene Freden one of Sweden's most famous restaurants.
But it is not just the history which attracts the customers... it is also one of the best places in Stockholm to try classic Swedish cusine and flavors. They have both a regular menu as well as a seasonal. It is also one of the best places to try the famed Swedish meatballs. This is just what I did earlier this week when I had a friend visiting from the States. The perfect meatballs with all of the classic accoutrements: potatoe purée, pickled cucumbers, lingon berries and a cream sauce. The restaurant has been awarded the Michelin Guide's Bib Gourmand (good food and at a reasonable price) for several years in a row.
Den Gyldene Freden is located in Gamla Stan (old town) on the picturesque street Österlånggatan and is just a 10 minute walk from the Rival Hotel. For other restaurants serving Swedish cuisine... click here.
Email Post
Labels: Gamla Stan restaurants