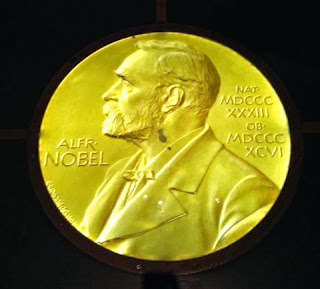 Not only is it the season for Christmas and Lucia... it is Nobel Prize season as well! On December 10th the annual ceremony will be held here in Stockholm to award the prizes for Economy, Medicine, Physics, Chemistry and Literature. The Nobel Peace Prize is awarded seperately in Oslo on the same day.
This weekend and the days leading up to the 10th are busy here in Stockholm with lectures, concerts as well as arriving dignitaries and award recipients. On December 10th the awards will be presented by the Swedish Academy and the King at the Stockholm Concert Hall (Konserthuset)... followed by the famous banquet at City Hall (Stadshuset). To be honest, none of these events are open to the general public. However, there are many other ways to get into the Nobel spirit while you are visiting Stockholm.
First of all is the Nobel Museum, which is located in Gamla Stan (15 minute walk from the Rival Hotel). Here you can learn about Alfred Nobel, the inventor of dynamite and founder of the Nobel Prizes, as well as the history of the prizes and past winners. They have temporary exhibitions as well... and the current exhibition (opened yesterday) fits right in with the season. Called "Fashion Innovation 3", it features creative interpretations of this year's awards by students from both Beckman's College of Design and the Royal College of Music. Sounds interesting! The exhibition will continue until April 13th, 2014.
Another option is to visit the City Hall and take a tour of the inside and see the hall where the Nobel banquet is held every year. Tours in English are given (in December) at the top of every hour between 10am and 3pm and taking a tour is the only way to get inside. Be aware that there are no tours on the 9th and 10th of December due to the banquet and the preparations. Having dinner at Den Gyldene Freden is a great way to round off your Nobel visit. It is here that the Swedish Academy, who choose the winners for the Literature Prize, eat dinner every Thursday evening.
Finally... you can do like Swedes traditionally do: view the festivities on TV (mostly to see what the queen and princesses are wearing). Some hardy people do stand in front of the Concert and City Halls to see the royalty, dignitaries and prize winners arrive and depart.
Here you can read about my recent visits to the Nobel Museum, City Hall and Den Gyldene Freden.
Email Post
Labels: Nobel winter