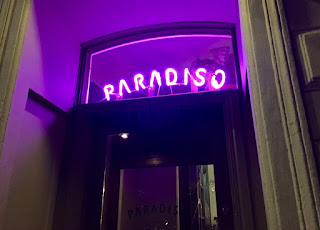 Once upon a time there was a restaurant called Sjögräs just a stone's throw from the Rival Hotel. It was a Bib Gourmand rated restaurant and a great addition to our neighbourhood. We were sad when they decided to close a couple of years ago. A completely different type of restaurant occupied the locale after that ("Angry Diner")... one that wasn't really here nor there when it came to cuisine and concept. We were therefore pretty excited when it was announced that they were closing and a new restaurant, Paradiso, was moving in... especially when we heard that the guys behind Paradiso had their background both at the former Sjögräs and at Linje 10 (another favorite restaurant of ours). 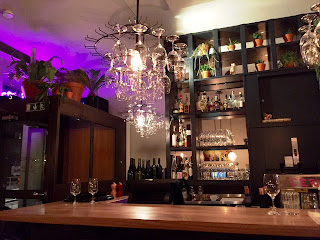 They have been open a few months now and last night I finally had the chance to visit Paradiso with a friend. The restaurant is located just a couple of blocks from the hotel here on Södermalm. This is a small, intimate restaurant with much of the space dominated by a large open kitchen and a smaller bar. They also have another bar with separate entrance from the street.
The description of each dish on the menu is minimalistic... just the three main ingredients are named. But the menu isn't extensive and the waitstaff is only too happy to explain each dish in more detail. I would describe the cuisine as modern Scandinavian using a lot of seasonal produce. I had the reindeer with salsify and shiitake mushrooms while my friend ordered the lamb with ramsons and yellow carrots. All delicious. One thing not found on any of the main course dishes was a carbohydrate element (potatoes, rice, etc.). Instead the dish focuses on the meat/fish/vegetables which is definitely on trend here in Stockholm.
We ended the evening with some dessert ("pineapple, rum and lime" for me and assorted cheeses for my friend). Paradiso has a large assortment of aged rums from the Caribbean so we, of course, had to try some as well. You can book your table on their website or, if you are staying at the Rival Hotel, contact me for any assistance. Click here for more restaurant recommendations and reviews.