The restaurant Indian Garden in Stockholm is quite the success story. Behind the restaurant is chef Karim Razaul who moved to Sweden from Bangladesh as a 19 year old. He opened his first restaurant in 1999 and it quickly became very popular, winning the prestigious Gulddraken prize four times. International prizes came soon after. In 2010 Karim won the "Tast of Britain" prize for best and most creative curry cuisine in Europe and he followed it up in 2012 with winning the Best European Curry Chef. And with the success came an expansion and they are now found at 6 locations in Stockholm... the latest in the newly opened Mall of Scandinavia.
A good friend and I ate dinner last night at the original Indian Garden, located in the Hornstull district not far from the Rival Hotel. Embarassingly enough, it was my first time at an Indian Garden. Indian cuisine has never been a favorite of mine and after last night I have come to the conclusion that this is beacause I have been eating at the wrong Indian restaurants up until now. It was a delicious meal. Even better, it was very reasonably priced... a bit more than a neighbourhood curry joint, but with much better food. 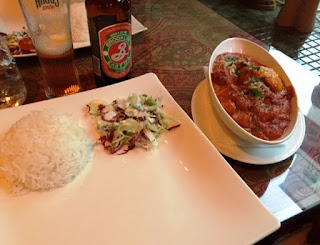 The menu is extensive and has both well known Indian dishes (tikka masala, balti, etc.) as well as chef Karim's original "gourmet" dishes. The restaurant is not fancy, has a laid back ambiance and is not at all large, so it might be a good idea to book in advance (especially on a weekend). If you are staying at the Rival Hotel, contact me directly for help in reserving a table. Otherwise they do have an online booking function on their website. A good choice in Stockholm for good Indian food in a casual setting  and at reasonable prices! Click here for other restaurant reviews and recommendations. 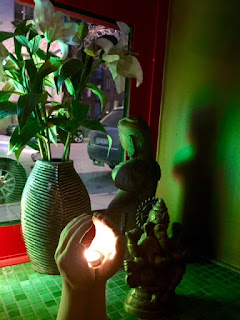