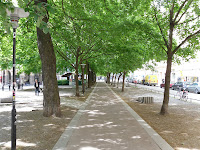 Some PR genius came up with the idea of naming this area SoFo, both a play on the name Soho and an acronym of its location... South of Folkungagatan ("gatan" = street) as seen on this map. While this neighborhood doesn't have the size or scope of SoHo in NYC or London, nor the art & theater scene, it does have a bit of the bohemian feel. I especially like the streets Bondegatan and Skånegatan. 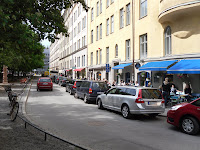 During the day you will find plenty of cafés and small, unique boutiques selling everything from music to furniture to vintage clothes to kitchy interior design trinkets. Some favorite stores are Grandpa, Beyond Retro, Pet Sounds and Coctail. There is a nice park area at Nytorget ("new square") with some great cafés nearby. In the evening there are a wide selection of restaurants to visit, though no late night bars as this is a residential area. Some favorites here are Thai Koh Phagnan, funky Pet Sounds Bar, gay-friendly Roxy and the classic Pelikan where you can get good, rustic Swedish cuisine like meatballs and Pytt-i-panna. The last Thursday of every month the neighborhood has a SoFo-Night where the stores are open extra late until 9pm.

I don't think that this is the prettiest or hippest area of the city, though it is an authentic Stockholm neighborhood and a great place to stroll around and see how Stockholmers live! 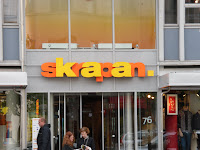 ht on the border of SoFo (on Götgatan) you have Skrapan shopping center. They boast being open a little later than other malls (8pm on weekdays, 6pm on weekends) and having stores that are not usually found in Swedish shopping malls. It is located in one of the few tall buildings in Stockholm. The name itself is a Swedish nickname for skyskraper, though it can't compete with the real ones in NYC or Chicago. At the top of the building is a restaurant & bar called Och Himlen Därtill with great views over the city!
Email Post
Labels: restaurants shopping SoFo