There have been many travel articles comparing Brooklyn with Stockholm, especially the Södermalm neighborhood. I'm not sure whether it is similar gentrification projects, hipster culture, fashion or some type of combination that is the main reason for this comparison. The BBC recently reported that Stockholm was in love with Brooklyn, which was met with consternation by some locals. In 2012, Out Traveler voted Stockholm as the Style Capital of the World, with Brooklyn coming in 2nd place. There is even a Brooklyn Bar in the Hornstull neighbourhood. You will have to decide yourself how the two cities compare. Why am I babbling about this? Well, last week I visited a restaurant that I feel epitomizes this Brooklyn in Stockholm vibe: Urban Deli.
Urban Deli is located on the quaint square Nytorget in the heart of the SoFo district of Södermalm. They have also opened at a second location in the suburbs (Sickla). Urban Deli is a restaurant, bar, bakery, grocery store and, of course, a deli... all under one roof. It is very popular, both with the locals and visitors to the SoFo neighborhood. The bakery is well known for its freshly baked sourdough bread, but they also have a wide assortment of pastries and other breads. In the deli you will find delicious cheeses, sausages, meats, shellfish and more. They also do special events... everything from poetry readings to beer tasting.
The menu in the restaurant is filled with produce from their deli and I would describe the cuisine as Swedish/International. They were having a special Italian week when I was there with a friend last week, so the menu was all Italian. Their website is in Swedish but, if you are staying at the Rival Hotel, talk to me and I can let you know if they are having any special events or menus while you are visiting. As I mentioned, they are very popular and this, coupled with the fact that they don't accept reservations, means you might have to wait for a table. We had to wait 30 minutes or so for our table, which was fine as the bar is a great place to people watch and enjoy a pint of Brooklyn Lager (what else?). They are open for breakfast, lunch and dinner... 7 days a week so you have plenty of options to visit them!
They are also one of the stops on Food Tours Stockholm's tour of SoFo restaurants, which is a fun way to sample food from a variety of eateries in the neighborhood. Urban Deli is located on the same island (Södermalm) as the Rival Hotel... so it is just a 20 minute walk from the hotel. Otherwise the nearest subway station is Skanstull (green line). 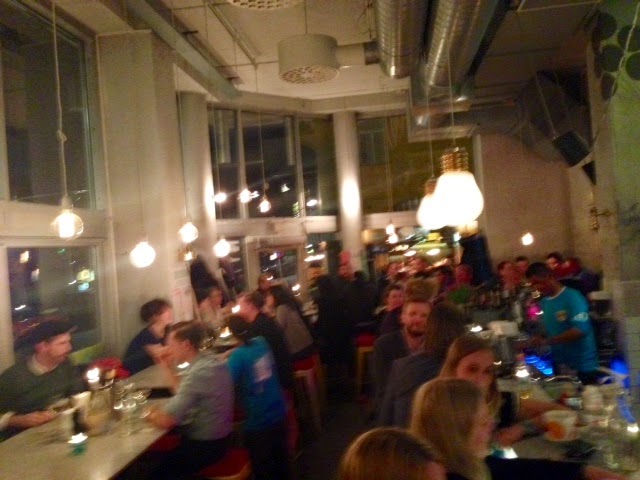