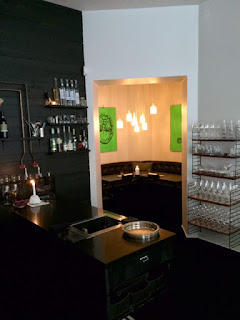 I just returned from a week-long vacation in Kraków; recharging my batteries after a busy summer season here at the Rival Hotel. But just before my vacation I had the opportunity to eat at Restaurant Volt. It was definitely one of the top 5 dining experiences I have had in Stockholm... and I have eaten at many restaurants in the city! 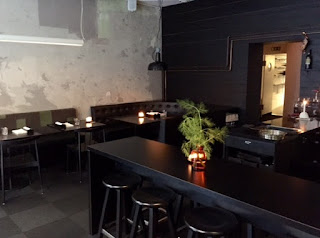 Volt received their first Michelin star this year and it is well deserved in my opinion. They serve, as many top rated restaurants in Stockholm, cuisine with a real connection to nature using the freshest, seasonal, local produce (often called "new Nordic"). I found the dishes to be very creative, with delicious flavors, and the wine pairings spot on. I also liked the ambiance... Volt is a smaller, cosy restaurant where the service doesn't feel rushed. Another plus factor was that the prices weren't painfully expensive when compared to other restaurants of the same caliber.
On the menu you have a choice of a four or six course set menu and you can choose a wine/drink pairing package as well if you wish. We opted for the four courses with the drink pairing. With the four courses you are given the choice of meat or fish for the third course. My friend and I both chose the guinea fowl for this course. It was delicious... served on a bed of roasted hazelnuts and chanterelle mushrooms.
Besides the four courses, you also receive a "snack" when you first arrive and you have the option of adding a cheese course (which we did). The creativity of the cheese dish especially impressed me. The plate was covered with crumbled goat cheese and thyme. On the side of the dish was something that appeared to be a scoop of vanilla ice cream but was, in fact, honey whipped with egg whites... like a sticky meringue. The attentive staff explained that we should dip our forks in the honey mixture and use it to pick up the goat cheese crumble. Delicious and creative!
A colleague, who had already dined there, told us to make sure we ordered coffee after dinner. I followed his advice even though I don't usually drink coffee late in the evening. It was the right choice. The coffee was brewed at the table and came with the most delicious sponge cake (sockerkaka). I was pretty stuffed already... but I still managed to eat half the cake!
Volt is located in the Östermalm neighbourhood. To get there from the Rival Hotel you can take the subway (red line) four stations to Östermalmstorg. Otherwise it is a 5-7 minute taxi ride. As I mentioned, this isn't a large restaurant... so make sure you book your table in advance! 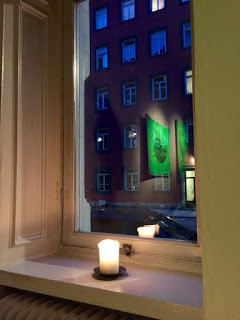