Opened in 1985, Stockholm's Hard Rock Café is celebrating their 30th birthday this year. That is quite an accomplishment! In fact, the Stockholm Café is actually the 4th oldest HRC in the world still in its original location (2nd in Europe after the London Café). As everyone knows, Hard Rock Café is a major global brand and it is a growing company with over 200 locations around the world... not only cafés but also casinos and hotels. 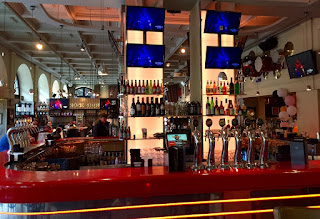 I stopped by to have lunch and a chat with Kevin Lee, their Sales and Marketing Manager. While I have been dropping by the Hard Rock for almost as long as they have been open, it was nice to get some background information. 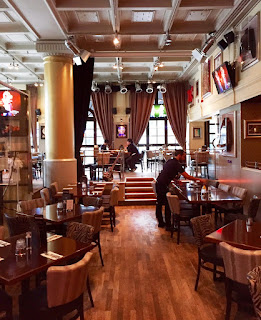 As a Stockholm Concierge, I often get asked by hotel guests where the Hard Rock Café is located. Sometimes they are looking for a meal and other times they wish to purchase merchandize. Kevin confirmed that collecting t-shirts, hoodies, pins and other items from different Hard Rock locations is still very popular. In Stockholm they have a well stocked "rock shop" with both classic items as well as newer models. 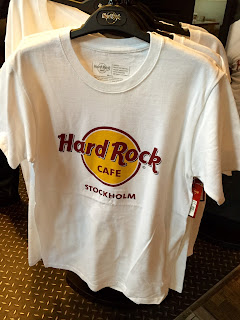 Another reason the Hard Rock is popular with concierge in Stockholm is the fact that the only time they really ever close is on Christmas Eve. This means that they are open on evenings when many restaurants in Stockholm are closed... Midsummer weekend, Christmas Day and New Year's Day for example. They are also popular with American expats living in the city (or Swedes who have lived in the States) as they celebrate many of the American holidays in grand style... like the upcoming Halloween and Thanksgiving.
I believe that most people are aware of the classic Hard Rock menu. However, when I visited they were trying out a few new vegetarian dishes as part of Vegetarian Awareness Month (October). I am not a vegetarian myself but I tried the Quinoa Burger and it was very good. Hard to believe that it was a veggie burger! They will be trying out 3 different juices and 6 dishes this month. We'll see what makes the cut and stays on the main menu.
As at all other Hard Rocks... there is of course paraphernalia from famous rock stars hanging on the walls. Here you will find mementos from both international musicians (Madonna, Michael Jackson, Nirvana, Slash, etc.) as well as local stars (ABBA, Europe,. etc.). Speaking of music, they have regular events, release parties and concerts at the HRC so it is a good idea to keep an eye on their website or Facebook page. Popular sporting events are shown on the restaurant's TVs as well.

The Hard Rock is located in the Vasastan area and the easiest way to get there from the Rival Hotel is by subway (green line) from nearby Slussen. Exit at either Rådmansgatan or Odenplan. Otherwise it is approximately 8-9 minutes away by taxi. Click here for other restaurant recommendations. 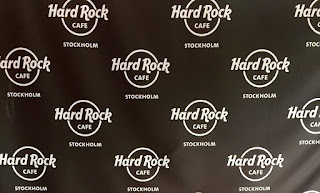