Stockholmers have been anticipating the opening of the Mall of Scandinavia for a few months now... and there has been quite a lot of press about their big opening in the weeks leading up to it. The PR was apparently a resounding success as so many people showed up to the grand opening Thursday night that they had to close the doors after only 30 minutes or so. Fortunately I played it smart and decided to make my visit the morning after to avoid the crowds. 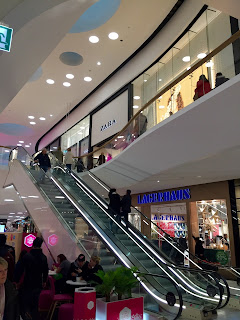 Apparently the biggest mall in Sweden and one of the biggest in Scandinavia, this shopping center is located in the northern suburb of Solna. It is right next to Stockholm's newly built stadium Friends Arena. Together they make up the core of a new Stockholm district called Arenastaden ("the arena city") which has big plans on being an ultra modern city suburb. 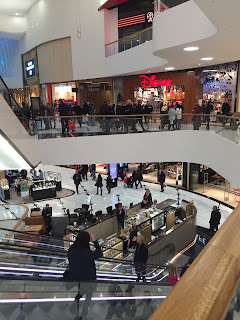 When I got there, shortly after they opened in the morning, the mall was already starting to fill with curious Stockholmers. It is quite enormous and very beautifully designed with many sleek lines and details. Fortunately there are several information desks spread throughout the mall where you can ask questions and get a map. The mall is triangular in shape with three floors and plenty of open areas connecting the floors. 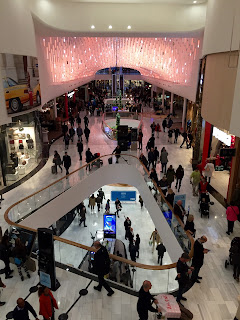 There are currently 224 shops and boutiques as well as 22 restaurants and a 15 screen cinema multiplex that includes the first commercial IMAX theatre in the Nordic region. It feels a little silly to report on the different boutiques found there as there are so many. But I can say that it is a wide range of stores from large well known Swedish stores (like Åhlens, Kapp Ahl and H&M) to smaller boutiques that aren't found in many other shopping centers. 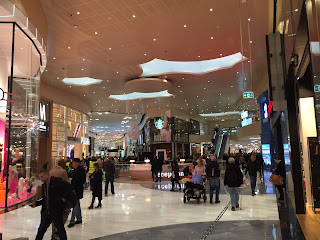 There are quite a few international brands like Disney, Victoria Secret and Tommy Hilfiger, but also many Swedish brands like Filippa K, J Lindeberg and Make Up Store. Besides fashion there are plenty of interior design stores and shops selling everything from accessories to hardware to cosmetics. There is even a liquor store, pharmacy, exchange office, spa and manicurist. Their website is currently only in Swedish, but it looks like they are planning other language options in the future. In the meantime you can find a list of the stores here.
It is very easy and quick to get to from the Rival Hotel... just take the commuter train (pendeltåg) from nearby Stockholm Södra station, in the direction of Uppsala, to Solna station. This is just four stations away and a 13 minute trip. The mall is located right next to the Solna station. If you are doing other shopping in the downtown area then you can take the commuter train from the Central station as well.