Taking the Commuter Train (pendeltåg) to and from Arlanda Airport

An update/reminder of an older article as I recently used the pendeltåg to get to Arlanda when I went on holidays. There are many ways to get from Arlanda Airport to downtown Stockholm and back: taxi, bus and high speed train (Arlanda Express). All great options, depending on your budget and time constraints. However, there is another option, which is of special interest to guests of the Hotel Rival! Stockholm has an extensive commuter train system (called pendeltåg in Swedish) run by SL, the same company that runs the busses and subways. They have recently extended a track and built a station at the airport. The station, called Arlanda Centralstation (or Arlanda C for short), is located between terminals 4 & 5, in Sky City. Trains currently depart at 13 and 43 minutes past the hour and the trip to Stockholm Central (Centralen) takes 38 minutes.
What is of particular interest for guests of the Hotel Rival is that the train continues south after Stockholm Central to Stockholm's Södra Station... which is located just 4 blocks from the hotel! Exit to the street Swedenborgsgatan, turn left on the street and walk 4 blocks to the square Mariatorget. We are located on the right-hand side of the square. So, instead of taking the Arlanda Express to the Stockholm Central and then having to take a taxi or subway to the hotel, guests can now take the commuter train the whole way (just about). The journey between Arlanda and Stockholm's Södra takes 43 minutes. Trains currently depart from Stockholm Södra to Arlanda at 04 and 34 past the hour. 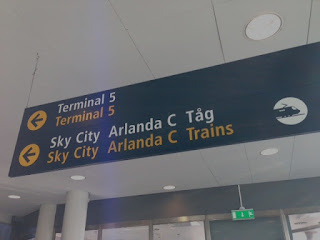 Even more good news... the trip is quite inexpensive. A one-time ticket costs 150 SEK. Compare that to a taxi which takes the same amount of time and costs 575 SEK and the Arlanda Express which costs 260 SEK but only takes you as far as the central train station. If you have a SL card (good for all commuter trains, busses, subways and some ferries) or one-time SL ticket then you only need to buy a supplementary airport fee for 120 SEK. They do sell the SL card at the Arlanda C station. Now for the bad news (you knew it couldn't be all good news). The trains only depart every half hour. So if you happen to just miss a train, you may have to wait up to 30 minutes for the next train. But if you aren't in a rush, or plan wisely, then this is a great option! I tried this option when I recently went on vacation and thought that it was quite easy to do and cheap.