One of Stockholm's better known restaurants (at least with Swedes) is Ulla Winbladh. The restaurant has been serving quality traditional Swedish cuisine since the mid 1950's, though the building itself was first built at the end of the 1890's for the General Art and Industrial Exposition in Stockholm. I had the chance to eat there a couple of weeks ago when a group of us were celebrating a good friend's milestone birthday.
Ulla Winbladh is the name of a fictional character found in several of Carl Michael Bellman's poems and songs. Bellman is one of Sweden's most beloved poets. In several of his works the pastoral island of Djurgården is featured... which is just where the restaurant is located. Djurgården is Stockholm's national city park and where many of the city's main attractions are located, like the Vasa, Skansen and ABBA the Museum. It is also a beautiful park! 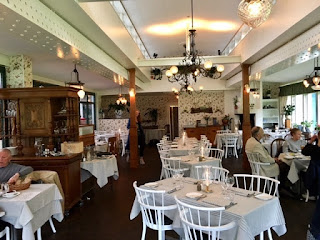 Ulla Winbladh is the perfect place to try Swedish traditional cuisine's more popular dishes, like pickled herring, Toast Skagen, bleak roe (löjrom), Swedish meatballs, marinated salmon (gravad lax), Beef Rydberg and much more. They are open for lunch and dinner, and its location makes it a great option to take a lunch break while visiting museums or end a cultural day with dinner.
Ulla Winbladh is also rated as a Bib Gourmand restaurant in the Michelin Guide, which means that they don't have any stars but the guide considers them to have "exceptional good food at moderate prices". To get there from the Rival Hotel, you can either take a taxi (10-15 minutes), or take the Djurgård ferry from nearby Gamla Stan and then walk 15 minutes to the restaurant through the park. Click here for more restaurant recommendations/reviews.