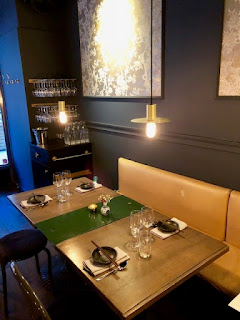 I had the opportunity the other evening to try a relatively new restaurant called T8NG that has opened up just a couple of blocks from the Hotel Rival. T8NG, pronounced "tong", serves Chinese cuisine, however it is definitely not your run-of-the-mill Chinese restaurant. To start with, the ambiance is modern & trendy with no red lanterns or paper dragons to be found. Secondly, they take their inspiration from international Chinatowns around the world instead of China itself which adds to its urban feel.
It is not a large restaurant; cozy yet modern with nice design details. The cocktail bar is beautiful and they do have some great cocktails as well as a nice range of aged Chinese rice wine and baijiu (grain spirits). Our waitress was very knowledgeable and could explain the different types of rice wine, which were fun to try. T8NG does indeed resemble a modern, urban restaurant you might find in a Chinatown somewhere in the world.
The menu is made up of medium sized dishes, designed to be shared by the table though you could order 1-3 dishes for yourself if you are traveling alone. The flavors come mainly from the Sichuan and Hunan provinces which are well known for their spicy dishes. Several of the dishes were indeed spicy, but these dishes are clearly marked on the menu and the waitress were very good at informing which ones were spicier than others. Personally, I like spicy but there were many options for diners preferring less spicy.
T8NG is located on Södermalm, just a couple blocks from the Rival. If you are coming from elsewhere in the city, the closest subway station is Mariatorget (red line). It is, as I mentioned, a smaller restaurant so booking a table in advance is a good idea. I should mention that they have another, more casual bar next door called Little T8NG. According to their website, this is a "fancy dive bar serving cheap beer, hi-balls and spicy noodles". Even better, they are open until 3am! Click here for other restaurant recommendations. 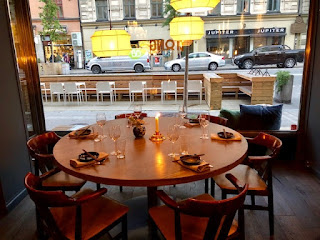 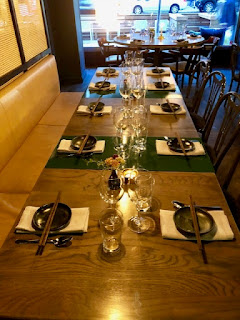