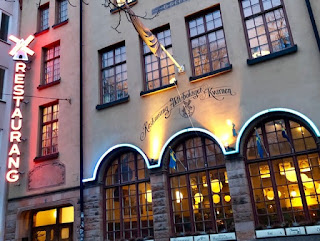 Yesterday I was invited, along with my colleagues at Les Clefs d'Or Sweden, to a dinner at the historic restaurant Kvarnen. The restaurant is located just a stone's throw from the square Medborgarplatsen on Södermalm... just about a 10-12 minute walk from Hotel Rival. Otherwise, the closest subway station is Medborgarplatsen (green line). The restaurant is steeped in history and is a great place to try traditional Swedish cuisine and feel some authentic "Söder" ambiance.

Kvarnen means "the mill" in Swedish and the restaurant's name (originally Gråkvarn- "grey mill") was inspired by a mill which stood nearby until 1863. Södermalm is the largest of the 14 islands which make up Stockholm and, up until modern times, Södermalm was known as the working class district of the city. Gentrification during the last century turned the area into a more trendy, bohemian neighborhood... popular with artists and hipsters. Opened in 1908, the restaurant has kept to the working class history of the area with its beer hall atmosphere and hearty cuisine.
Kvarnen has lovingly kept the historical details of the interior and it looks much like it did back over a hundred years ago. The main dining room features features beautiful high windows, black & white checkered tiled floor and lots of interesting details and artwork. In the back, behind the main dining room, they have a great, rustic bar ("bakfickan") with Swedish and Czech microbreweries on tap. Kvarnen also has a chambre separée downstairs for private dining and events (up to 25 persons).
As I mentioned, Kvarnen serves traditional Swedish cuisine. About half of the menu is filled with traditional dishes and the other half is more modern dishes using seasonal Swedish ingredients. We were served 4 types of pickled herring for our starter and Swedish meatballs for the main course... all washed down with Swedish beer and traditional snaps. Hearty and delicious! Other classic dishes on their menu include fried herring, toast skagen, renskav (reindeer stew), grilled trout and cured salmon. Click here to find more restaurants in Stockholm which serve traditional Swedish cuisine and click here for other restaurant recommendations.
A few interesting bits of trivia... Kvarnen attracts readers/fans of the Millenium book & film series as it is mentioned a few times as being the character Lisbeth Salander's favorite restaurant and bar. Another guest demographic is the fans of the local football club Hammarby and they can often be found here before and after matches, dressed in green & white. Finally, Kvarnen shares a history with another historic restaurant, Källaren Hamburg, which was once located close by (Kvarnen took over their liquor license when Hamburg closed in 1908). Källaren Hamburg was around as far back as the 1640's and was where criminals, sentenced to death, were infamously allowed one last shot of snaps as they were taken to the gallows nearby. 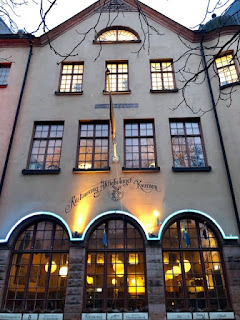