Slussen... What on Earth is Happening There?

Slussen means "the water locks" in Swedish and is the name of the area in Stockholm, between Gamla Stan (old town) and Södermalm, where locks connect the Baltic Sea with Lake Mälaren. There have been locks here, in some form or another, since the mid 1600's. Not many visitors understand that Stockholm sits astride the border of the lake and sea, with water flowing out into the Baltic on either side of Gamla Stan, making water locks necessary for boat traffic and to control waterflow. Besides the boat traffic, Slussen's strategic location makes it a large transportation hub for trains, subways, cars and busses. Every day, thousands and thousands of people pass through, over or under Slussen.
These days, however, if you mention "Slussen" to a Stockholmer, you will likely get a groan or an eye-roll, maybe even a choice expletive. This is because Slussen is now a massive construction project and it is not expected to be finished until 2025. Not only is it an unsightly mess, but public transportation is adversely affected at times and Swedes have had to listen to public and political debates on Slussen for the better part of the last decade. In other words, we are a little tired of it and we still have about 6 years left! I do get a lot of questions from hotel guests about the project, so I figured a blog article was in order.
Everyone agreed that something needed to be done about Slussen. It had been 80 years since the last renovation of the locks, the roads over the locks were pretty obsolete (designed for left hand traffic, which Sweden had until 1967), unable to accommodate the increase in traffic and, to top it all off... the whole structure was sinking. The lengthy debate centered more on the end result: what was the new Slussen going to look like? Politicians debated in City Hall and Stockholmers hashed it out in the media and court of public opinion. Modern and sleek? Historic reconstruction? What to do with pedestrians and cyclists? Where will the busses go? 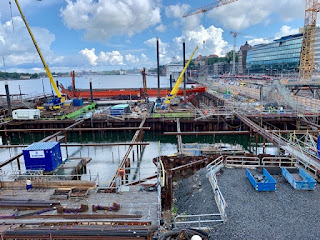 Construction finally began in 2016 and there is no going back now! The original budget was for 12+ billion SEK. We will see how that goes. If you are interested in more information about the project and want to see models on how Slussen will look when completed, they have opened up an information center which is located right adjacent to the project. I was there the other day and found it quite interesting... and it gave me a better understanding of what they are doing (which helps when your commute gets messed up because of the construction). You can also check their website by clicking here!
How does this affect you as a visitor? If you are staying with us at the Hotel Rival, you will pass by Slussen when you go to the old town or downtown areas. But the effect should be at a minimum. They are building in two phases in order to make sure that pedestrian and cycling traffic is never compromised. Both the green and red subway lines pass over Slussen and, during the summer months, they do work on the rail bridge... but always keep one line open. Busses are rerouted as the construction goes on, if you are staying at the Hotel Rival, ask me about the most up to date bus routes.
The City of Stockholm has kept a sense of humor about the whole thing. All along the construction site, they have put up signs poking fun at the mess, Stockholmers' wont to complain and how Slussen separates the tourists (Gamla Stan) from the hipsters (Södermalm). Good for a chuckle or two. They have also put in windows, at various heights, in the partitions so that pedestrians can follow the project and see what they are doing. But, if you want to get a bird's eye view of the construction, head to Katarinahissen, located just above Slussen, and take it all in. 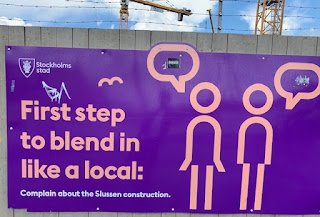