There are almost 90 museums and attractions in Stockholm, giving the city one of the highest museums per capita ratios in the world. I have been to many of them, but there are a few I haven't visited yet. Embarrassingly enough, the Stockholm City Museum (Stadsmuseet) is one of them. It is embarrassing because the museum is literally three blocks away from my workplace Hotel Rival. In my defense, they recently reopened after being closed for four years due to renovations. Yesterday, however, I rectified the matter and finally visited the museum!
The museum is located in the Slussen area, in a beautiful building from the late 1600's (designed by Nicodemus Tessin the Elder, who also designed Haga Castle and Drottningholm Palace as well). The museum is dedicated to the history of Stockholm from the 1500's to today. Their sister museum is the Medieval Museum (Medeltidsmuseet) which looks at the period of history in Stockholm before the 1500's (approximately from its founding in 1252 through the1400's). It is worth noting that both of these museums have free admission! 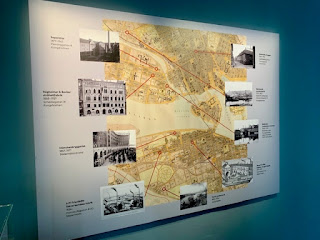 I found the museum to be really interesting and well put together. I have been to the Medieval Museum several times, but it was nice to see this part of Stockholm's history as well. The museum is made up of four floors, including the entrance level with gift shop. As you work your way up, floor by floor, room by room, you move through Stockholm's history: The Reformation, Stockholm as a trading hub, as the capital of an empire, the Industrial Age, city growth and finally in the Modern Age.
Similar in style to the Medieval Museum, the Stockholm City Museum shows the history of Stockholm since the 1500's through life-size dioramas, artifacts, maps and multimedia visual aids. All the information is well explained in both Swedish and English! Some highlights for me were the model reconstruction of Makalös (former palace of the de la Gardie family that no longer exists), a look at Sweden's Caribbean colonies, some great photographs from the late 1800's and a video taken from a subway conductor's view while travelling through the Stockholm underground system. Click here for other museums in Stockholm dedicated to history.
Besides the museum itself, the Stockholm City Museum also arranges themed city walks. Currently, they have both Stieg Larsson's Millennium (public and private) and ABBA (private) walking tours available. The museum, as I mentioned, is located near Slussen... just a three block walk from the Hotel Rival on your way to the old town (Gamla Stan). Otherwise, the nearest subway station is Slussen (green and red lines). There is major construction going on at Slussen right now (and for the next few years), but you can follow the signs for the museum or look for the main entrance to the subway station (which is just a few meters from the museum). I will write a bit about this construction at Slussen in my next blog article.