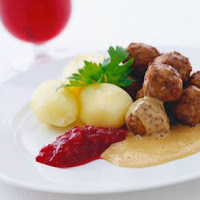 You can't travel all the way to Stockholm and not try the local food. Swedish cuisine is world famous! Almost everyone has heard of things like Swedish meatballs, pickled herring and the smörgåsbord. But Swedish cusine is so much more. Seafood is very popular, often including salmon, shrimps and other shellfish. Local wild game (reindeer, venison, moose, wild boar) has made real inroads recently in Swedish menus. Local produce, like lingon berries, mushrooms and vegetables, are often incorporated into dishes and it bears noting that Swedish cuisine is often very seasonal... asparagus and strawberries in early summer, crayfish in late summer and wild mushrooms and berries in the fall to name a few examples.

Swedish chefs have come a long way from the Muppets, with many chefs winning international contests. Marcus Samuelsson was the chef that the Obamas recently picked to cook their first State Dinner. Other chefs (Melker Andersson, Mathias Dahlgren, Jonas Lundgren, Niklas Ekstedt, Erik Lallerstedt, etc;) have made quite a name for themselves on the international foodie scene and many of them have award winning restaurants in Stockholm.

Looking for restaurants in Stockholm that serve Swedish cuisine? Here is a list of restaurants that I recommend... (Rustic = "husmanskost")