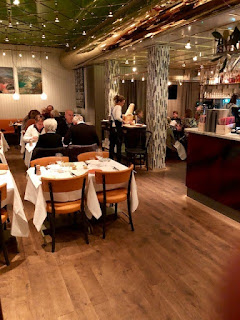 A restaurant has recently opened up just a stone's throw from the Rival Hotel (10-12 minute walk) called Brasserie La Colline. They invited members of the Rival staff this past week to come by for dinner and a presentation. As they have the same owners as the popular restaurant Tranan and have recently received great reviews in two of the daily Swedish newspapers, I was eager to give them a try.
La Colline is located on the nearby pedestrian street Götgatsbacken. For the most part, this street has been the home of pubs and cafés and not many proper, good restaurants... so it is great that they have opened up here. In fact, the locale they took over used to house one of these pubs. There is definitely no sign of the former owners now... the interior has been designed by Jonas Bohlin, who has also designed some of Stockholm's most well known restaurants like the above mentioned Tranan as well as Sturehof, Luzette, AG and Stadshuskällaren.As a Stockholmer who goes out often, I both recognize and appreciate his design style. 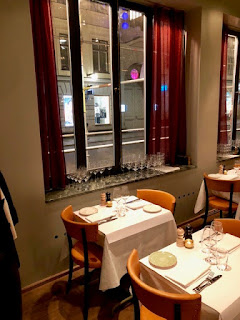 I would say that the cuisine is mainly Mediterranean, though with some hints of the wider world (even Sweden) on the menu. While they do have a few main courses on the menu, they have a lot of "snacks" and many appetizers as well. Our waitress recommended that we order several of these to share, tapas style, which we did. She also mentioned that the menu is constantly changing and they even have a chalkboard where they have several extra daily dishes.
My colleague and I chose the Padrones (Spanish peppers), Pulpo (octopus), Bleak Roe, Tartar and Beetroot dishes. They were all very good. I especially liked the Pulpo with garlic and a Jerusalem artichoke créme. For dessert we also chose a few to share. Cherry sorbet with meringue, cream with cloudberries and chocolate ice cream with coconut. The perfect way to end the evening. 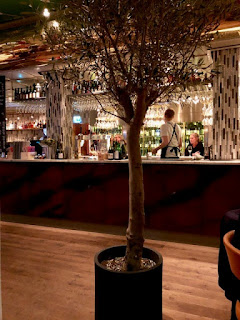 As I mentioned, La Colline is just a short walk from the Rival Hotel. Otherwise, the closest subway station is Slussen (green & red lines). As they have received some great reviews, I definitely recommend booking a table in advance... either online or, if you are staying at the hotel, contacting me directly for help. Click here for other restaurant reviews/recommendations. 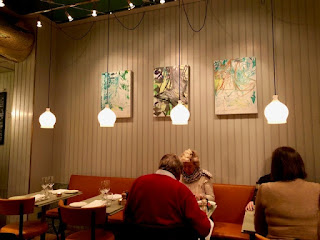 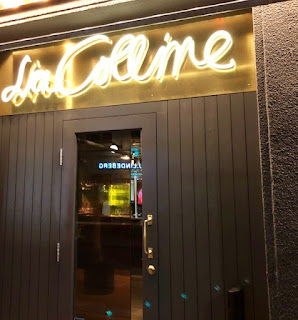