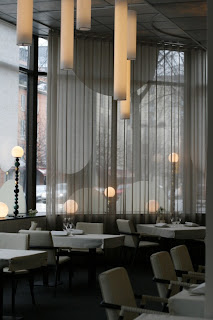 (Edit: sadly they are closing for business on June 28th, 2014 and are in the process of looking for a new locale) Several culinary master-chefs have attained near rock-star status these days. Following this trend, there are several restaurants in Stockholm named simply after the chef. The latest in this category is Chef Jonas Lundgren who has recently opened a restaurant called Restaurant Jonas. Lundgren won the silver medal in 2009 at the prestigious Bocuse d'Or competition and the restaurant itself, though newly opened, has already received awards... the White Guide named Jonas "2012's shooting star" as well as receiving the International Masterclass grade. The New York Times has even been by to do a review. 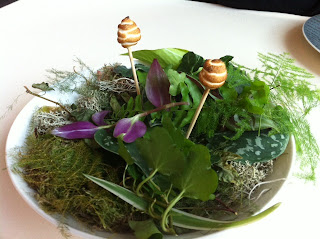 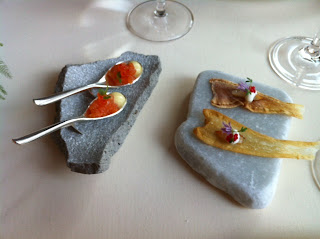 I recently visited Restaurant Jonas with a colleague and tried their 9 course tasting menu with wine pairing. It was incredible! Besides the fabulous and unusual tastes, the dishes themselves were beautifuly presented... a delight for all of the senses. The service was outstanding and the wine pairings were spot on. The design of the restaurant is pleasing as well... minimalistic nordic design and sensibility contrasted by a hanging wall garden (with spices and herbs). An explosion of green in an otherwise subdued color palette. 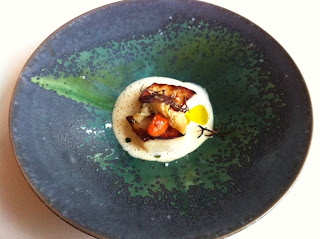 The menu isn't set and depends upon what fresh produce they have procured that day. They do, however, use key words in the menu to guide the kitchen, like "creativity", "sin" or "memory". In the dining room you have a choice of a six or nine course tasting menu, or you can put your faith with the chefs and let them decide your meal ("all in" this is called). If you desire something a bit less extravagant (but no less delicious), then you have the choice of dining in their Food & Wine Bar in the adjacent dining room. Here you can choose from their a la carte menu... or enjoy one of the many great wines they have by the glass. A nice addition is their Show Kitchen in between the two dinig rooms, where you can watch chefs preparing certain dishes. And for those who really want to see the action then you can book the Chef's Table in the kitchen itself. Dinner and a show! 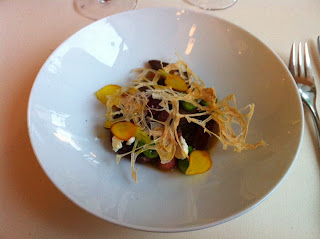 The restaurant is located on the island of Kungsholmen. It is about a 10 minute taxi ride from the Rival Hotel, otherwise the closest subway station is Rådhuset (blue line). The first picture in this post was provided by Restaurant Jonas, the rest were taken by me...
Click here for some additional information about special culinary events at the restaurant.