Ok. Now I know many readers will think "why are you writing about Starbucks? You usually write about museums, festivals and local restaurants". True. And this subject (the coffee giant's expansion in Sweden) is also not without controversy... with Stockholmers divided on the subject. As you may know, Swedes are very particular about their coffee (second largest consumers of coffee per capita in the world) and Stockholmers can especially be a bit pretentious about their java. For some, Starbucks is a multinational corporation squeezing out small cafés from the market, while others are happy that they no longer have to travel abroad to get their "pumpkin spice latté" fix. 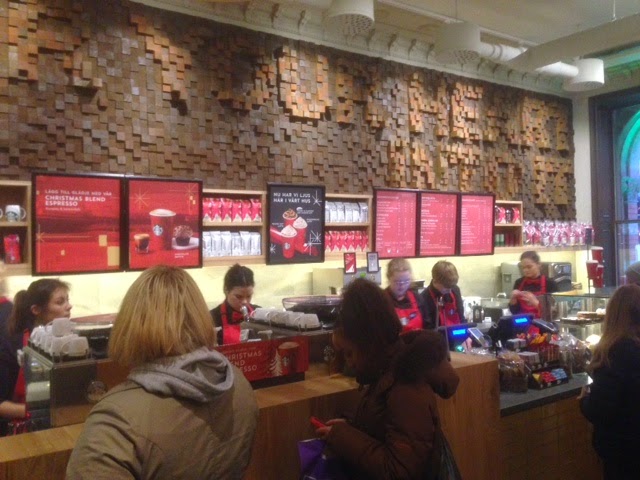 So why write about it? Well, as a Concierge, I have been asked quite a few times by hotel guests where the closest Starbucks is located. I would usually just recommend one of the many great local cafés in the neighborhood (including the Café Rival), as the only Starbucks, until recently, has been located in the Central Train Station... a bit far away from the hotel just to grab a coffee. However, I was recently informed by a guest that the reason she wanted to find a Starbucks is to buy the Stockholm Starbucks coffee mug. Apparently people collect them in every city they visit much like Hard Rock Café merchandize. I learn something new everyday...
So I am writing this blog article as a public service announcement to inform visitors that Starbucks opened today on Södermalm (location), just a 10 minute walk from the Rival Hotel. And they do have Stockholm merchandize! Otherwise, there are Starbucks located on Stureplan and, as I mentioned earlier, in the train station. More are planned as part of their Swedish expansion. It remains to be seen if they can find their place in the finicky Swedish coffee market.