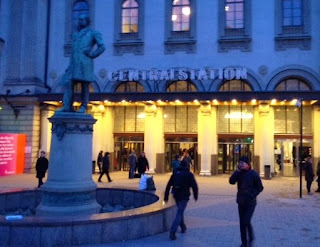 Taking a little break from restaurants, stores and museums to pass on some more practical information. From time to time, I have been asked if there are storage facilities at the main train station, usually by hotel guests who might have an evening flight and want to spend the day in the downtown area after checking out, shopping before heading to the airport. In some cases, they would rather take their luggage with them and not have to go back to the hotel first before going to the airport. From the Central Train Station you can get to Arlanda airport with taxis, Arlanda Express, the commuter train or the airport bus.
So, the answer to the question is... yes, there are facilities at the train station where you can store luggage. I was invited to an event a few evenings ago and had been shopping in the city. I didn't have time to go home in between and decided that the best thing would be to store my loot in one of the luggage lockers at the station... and I thought that it would make a good "how to" blog article.
The Central Train Station is located in the downtown area, not far from the City Hall (Stadshuset). Not only is it the hub for all train traffic, you also have the main subway station (T-Centralen) underneath as well as the new commuter train station under the subway station. Adjacent to the train station you have the main bus station (Cityterminalen) where you have more long distance busses, including the ones to the different airports servicing Stockholm.
They actually have storage lockers at several different points in the train and bus stations. but I used the ones on the floor under the main level of the train station, close to the subway station entrance. The storage lockers come in two different sizes: small (36cm x 44cm x 60cm) and large (46cm x 60cm x 85cm). According to the website, they do have even larger lockers at the bus station for items like "skis and golf bags". Besides the lockers, they also have luggage check for larger bags and personals ervice. This is located on the lower level, near the lockers I used. The manual luggage check is open each day between 9am and 6:30pm while you can access the lockers as long as the train station is open. Different parts of the station have different opening hours but, for example, the lower level is only closed from around 2am to 4am.
For the lockers, you can either choose to store them for max 4 hours (small- 60 SEK, large- 80 SEK) or 24 hours (small- 70 SEK, large- 90 SEK). For the manual bag check the cost is 120 SEK for 24 hours, max 7 days. There are machines at the lockers where you pay with either coins or credit card and they have instructions in several languages. After you pay, you receive a receipt with a code on it. Don't lose the receipt as you need the code to open your locker.