Stockholm often promotes itself as being 1/3 city, 1/3 water and 1/3 green area (park and woodlands) and every Stockholmer lives no more than 300 meters from a park. It is nice being so close to nature! One reason for these positive statistics is the Royal National City Park of Djurgården. Not only is it the world's first national city park, it is also the world's largest national city park (27 sq. km or 10 sq. miles).
When most people hear "Djurgården" they think of the island of that name where many of Stockholm's most famous sights are located... like the Vasa Museum, Gröna Lund, Skansen and ABBA the Museum. But this island is only a small part of the larger park area with the same name which stretches up north around the city.
In the northern portion of the park, there is a lake called Brunnsviken and on the lake's west coast is Haga Park (Hagaparken). This park is very popular with Stockholmers and is one of Sweden's most visited recreation areas... both for the beautiful parklands and the many interesting buildings and sights in the area. Click for map. 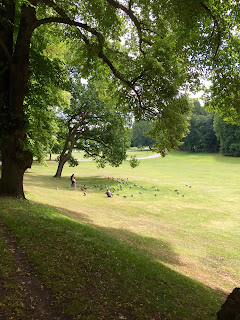 Haga Park was created by King Gustav III in the late 1700's following one of the Age of Enlightenment's principal ideals of living closer to nature. Many of the king's grandest plans for the park came to an abrupt end when he was assassinated in 1792. However, much was completed and can still be seen/visited today... palaces, temples, pavilions, pagodas and gazebos. Click here for a list and description of the buildings in the park.
Of special note, especially for children, is the Butterfly House (Fjärilshuset). This greenhouse (once the king's palace kitchen gardens), with its tropical rainforest environment, is the home to 700 species of butterflies. Recently they have added an aquarium called Haga Ocean and has a popular shark tank.
To get to Haga Park from the Rival Hotel, take the subway (green line) to Odenplan. From there you take bus number 515. The bus trip just takes 10 minutes and you can get off at either Haga Södra (south gate) or Haga Norra (north gate).
Feeling a bit more adventurous? You can walk around the entire Brunnsviken lake. There is a well marked path and the entire walk is 11 kilometers long. On the east coast of the lake you will find many other points of interest like the Natural History Museum, the Bergianska Trädgård (botanical gardens) and Stockholm University. There is also a subway stop on that side (Universitet- red line) which makes travel a little easier.