While writing an article about the restaurant Fem Små Hus recently, I noticed that it has been awhile since I wrote an overview/guide about Gamla Stan and it would probably be good with an update now that the summer tourist season is around the corner. Gamla Stan (Swedish for "old town") is an island and the heart and center of Stockholm, literally and figuratively. It is the geographic center of the city and where Stockholm was founded back in the 1200's (the city was first mentioned in texts in 1252). It is both the bridge between the northern and southern parts of Stockholm as well as where Lake Mälaren flows into the Baltic Sea. 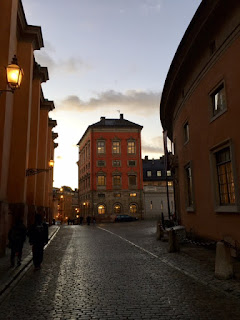 So, if you are visiting Stockholm, you will more than likely visit this part of the city at some time... whether passing through, wandering around to soak up the history or visiting an attraction, bar or restaurant. Gamla Stan is by no means large and you can easily walk the circumference in about an hour or so. Yes, during the busy summer season it can get quite crowded with tourists... but don't let that discourage you from visiting! There is plenty to see & do and you can avoid much of the crowds by getting off the main thoroughfares.
Attractions. I would say that the main attraction here is the Royal Palace. It is an actual working palace and the Swedish royal family have their offices there. You can visit the apartments or one of the several museums within the palace, like the Royal Treasury, Tre Kronor (ruins of the former palace which burned down) and Royal Armory. Watching the changing of the guards is a popular thing to do and it happens daily in the courtyard of the palace at 12:15pm (1:15pm on Sundays and holidays).
Adjacent to the palace is the main cathedral in Stockholm (Storkyrkan), though there are a few other churches as well in the area, like the Riddarholm Church and German Church (Tyska kyrkan). The main square (Stortorget) in the center of Gamla Stan shouldn't be missed and is, in fact, one of the most photographed places in Stockholm. In the square you will also find the Nobel Museum, dedicated to Alfred Nobel and the Nobel Prizes. The narrow alley Mårten Trotzig Gränd has become an attraction as well. You can also just stroll around the island and enjoy the great architecture... many of the buildings date back to the Middle Ages.
Restaurants & bars. Visitors sometimes decide to avoid eating dinner in Gamla Stan, fearing that all of the restaurants are "too touristy" but this is actually not the case. There are many high quality restaurants in this area. Sure, there are a few basic tourist eateries... but there are also some great restaurants as well. I also try and explain to guests that there is a big difference between a restaurant being "touristy" and being populated with tourists. In the summer months most restaurants in the city are filled with tourists but that doesn't make them touristy.
Some Gamla Stan restaurants that I would definitely recommend include Den Gyldene Freden, Fem Små Hus, Kryp In, Pastis, Mr French, Tradition, Cultur, Pubologi/Flickan/Djuret, The Flying Elk, Le Rouge, Österlånggatan 17, Kagges and The Hairy Pig among others. You also have a couple of historically themed restaurants, Aifur (Viking) and Sjätte Tunnan (medieval), for a more historical experience. If you are more interested in having a cocktail, then there are quite a few good bars and pubs in Gamla Stan.
Sightseeing. There are many sightseeing tours that either concentrate on Gamla Stan or include the area as part of a larger tour of the city. The main bus tour passes through and several boat tours skirt the island. The Hop On/Off busses and boats make, of course, several stops in Gamla Stan. But the best way to see Gamla Stan is on foot. OurWay Tours offer walking tours as does Strömma (summer months only). Free Tour Stockholm offers walking tours year-round. Or why not take a more unusual sightseeing tour... like a Ghost Walk, Roof Top Tour, Craft Beer Tour or 100 Point Challenge?
If you are staying at the Hotel Rival, we are just a 10 minute walk from Gamla Stan. Otherwise there are several busses that cross over the island and you also have the subway which has its own Gamla Stan station (red and green lines). If you have your own car with you, I would avoid driving in this part of the city as many areas are car-free and parking is at a minimum.