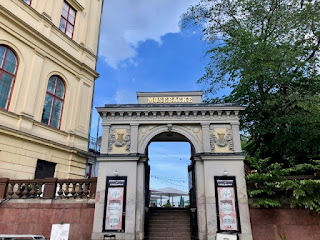 I was out this Sunday with family and friends for brunch at the restaurant Mosebacke Etablissement. The restaurant is located in a quaint historic neighborhood, just a 10-15 minute walk from the Hotel Rival. The neighborhood is called "Söders Höjder", which means southern heights, and is a nice place to wander about and soak up the history, check out the architecture & views and perhaps visit one of the restaurants and bars in the area.
One of the landmarks is Katarina Church. Originally built in the late 1600's, it has been through two major fires with one as late as 1990. Located on the heights, the high church tower can be seen from most of the city. Several famous Swedes are buried in the church cemetery including politician Anna Lindh, actor Michael Nyqvist, musician Cornelis Vreeswijk and poet and Nobel prize laureate Tomas Tranströmer. 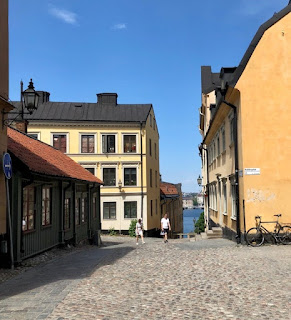 Just north of the church is a small neighborhood with cobblestone streets and older architecture from the 1600 and 1700's. I like walking around and looking at the beautiful buildings with a mix of architectural styles. One street that is popular with a certain segment of tourists is Fiskargatan, which was where the character Lisbeth Salander from the Millennium trilogy of books ("The Girl with the Dragon Tattoo", etc.) bought an apartment. You will also find a great wall mural painted by the Brazilian street artists (brothers) Os Gêmeos, which plays  on themes from these books. 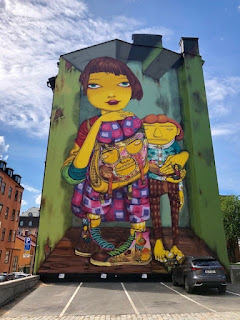 The square Mosebacke Torg is another landmark. This quaint square and park was actually named Stockholm's most beautiful square in 2006, and it is very charming. On the northern end of the square you have the entertainment venue Södra Teatern ("southern theatre") which houses a theatre, nightclub and a few bars and restaurants.
One of the most popular bars here during the summer months is their terrace Mosebackesterrassen which is an outdoor bar with great views of the city, often with live music. Another popular restaurant on the other side of the square is trendy Woodstockholm, an interesting combination of restaurant and furniture store.
On the northern end of the square you will find Katarina Hissen. This walkway leads out to an elevator (not in use now due to the construction at Slussen below) as well as the famous restaurant Gondolen. Here you have great views over the city which you can either enjoy from the walkway or at the restaurant. This area is located just in between the old town (Gamla Stan) and the shopping district SoFo in Södermalm... so it is easy to stop by while you are out discovering Stockholm. It is between two subway stations: Slussen (red and green lines) and Medborgarplatsen (green line).