Changing of the Guards

Watching the changing of the guards at the Royal Palace in Stockholm is a popular activity for visitors... and it happens daily, year-round! I haven't written about this event in years, but saw them marching the other day and realized that it would be a good idea to write a new article. The Royal Guard has been around since the 1500's and is made up of units from around all of Sweden. They are part of the Swedish Armed Forces and, besides guarding the palace, they perform ceremonial duties at many events like official state visits, opening of Parliament and other occasions.
The changing of the guards takes place in the outer courtyard of the palace, located in Gamla Stan, however the guards march to and from the Royal Stables, located in downtown Stockholm. This means that if you are out and about downtown during the day, you might see them march past (like I did the other day- see pictures below). It is always fun to stop and watch them go by in their beautiful uniforms. But to see them perform the ceremony of changing guards, the outer palace courtyard is the place to be! 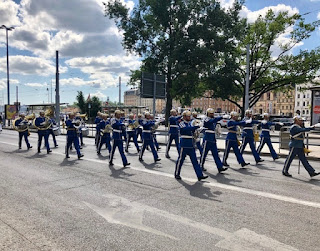 The ceremony takes place every day at 12:15pm, except on Sundays when the ceremony happens at 1:15pm, and lasts approximately 40 minutes. Come a little early if you want a good spot to watch the ceremony as a crowd usually gathers. They start marching from the Royal Stables at around 11:40am (Sundays at 12:40pm) and march down Strandvägen, past Kungsträdgården, over the bridge to Gamla Stan and then up Slottsbacken to the palace. During the summer months they do a full parade with military band! If you are here during the cooler months, then the parade with music is only on Wednesdays, Saturdays and Sundays. 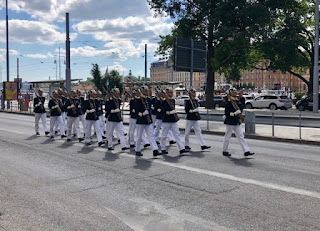 If you are staying at the Hotel Rival, stop by and talk to me for more information and directions. To get to the palace, it is about a 20-25 minute walk from the hotel. Otherwise the closest subway stop is Gamla Stan (red and green lines). After the ceremony, make sure you visit the palace itself... like the Royal Apartments, Treasury or Armoury. 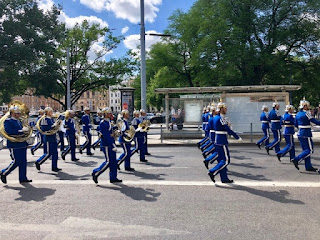 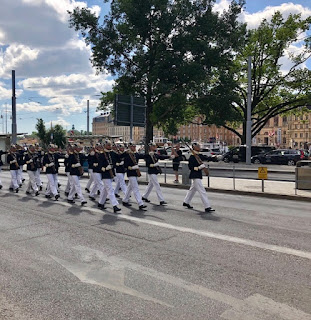