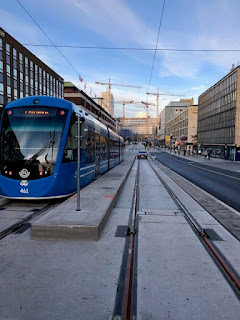 One of the most popular ways to get from the downtown area of Stockholm out to the island of Djurgården, where many of Stockholm's main attractions are located, has been the tram (street car) Djurgårdslinjen. This tram line, first with vintage trams and later with more modern cars, has run between Norrmalmstorg and Djurgården since 1991. There have been plans on extending this line on each end and, last week, the first stage was finally completed. The line has now been extended west to the Central Train Station. 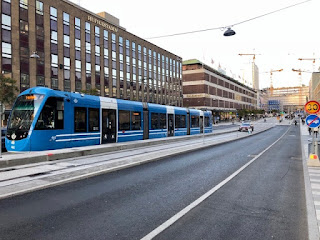 I say "finally" as the extension has meant a lot of construction and ripped up roads for a few years, especially around the NK department store and Sergels torg square. But it has been worth the trouble. Trams were a popular mode of transportation in many Swedish cities until the middle of the last century; phased out mainly in favor of busses and subways. The final death blow was when Sweden changed from left-hand to right-hand traffic in 1967. But now trams are making a comeback due to them being an environmentally and comfortable way to travel. They are even building new tram systems in some other Swedish cities, like Lund. 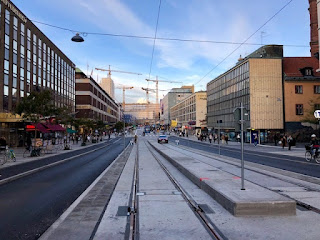 This extension is only a few blocks long and you might be wondering why I am writing about this. Well, the extension is actually quite strategic as it connects the line with the Central Train Station, the hub of all subway, train, commuter train and bus traffic in the city. So, for example, a guest at the Hotel Rival can now get to Djurgården by taking the subway to T-Centralen and then transferring to the tram (if they didn't want to take the Djurgård ferry from nearby Gamla Stan, another convenient way to get to the island). When you arrive at T-Centralen (subway station under the train station), just exit in either direction and walk up the stairs to the street Klarabergsgatan where you will find the start/end station in front of the Åhlens department store.