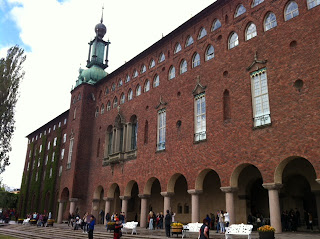 Stockholm City Hall, or Stadshuset, is one of the most famous Stockholm landmarks and is probably best known for being the venue for the annual Nobel Prize banquet. A popular tourist destination, it is also the functioning city hall and from where Stockholm is governed. Completed in 1923, using almost 8 million red bricks, the building is one of the best examples in Sweden of national romaticism in architecture. 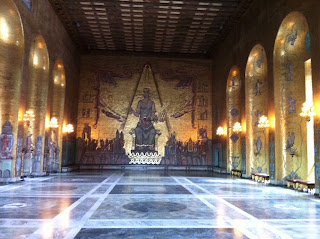 The only way to visit the interior of the building is by taking part in one of the public tours (recommended!),which are offered daily, or by booking a private tour. The public tours are given in several languages and the price for admission for an adult is 60-90 SEK depending on the time of year. The 106 meter tall City Hall Tower can be visited as well between May and September and costs an additional 40 SEK. The tower is open between 9:15am and 5:15pm and visits are organized in 40 minute intervals. Half way up the tower you will find the Tower Museum and at the top you have fantastic views of the city. 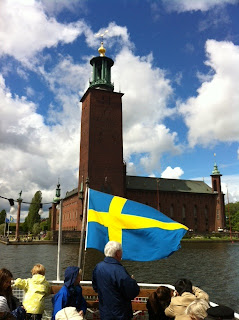 I think the grounds itself is worth a visit and I often stop by while walking along the Kungsholmen waterfront (pictures here taken from one recent such visit). There is a statuary garden between the water and the main building which is a great place to watch boats and enjoy views across to Gamla Stan and the island of Södermalm. There is also a golden cenotaph (empty tomb) of Birger Jarl, the founder of Stockholm according to tradition. 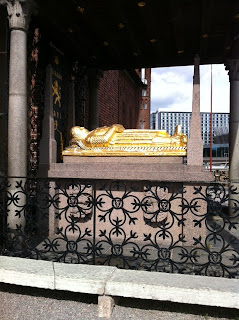 Located on the eastern tip of the island of Kungsholmen, it is quite close to Gamla Stan. To get to the City Hall from the Rival Hotel, it is about a 25 minute walk. Otherwise it can be reached by taking subway (all lines) three stations to T-Centralen. 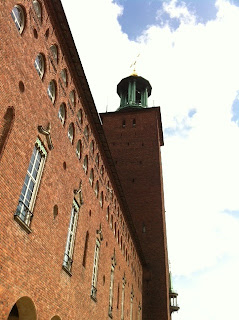