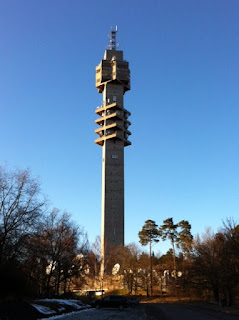 On my outing last week to Thielska Galleriet, I took advantage of the great weather and made a stop at the famous TV tower Kaknästornet (Kaknäs Tower) to enjoy the views. Completed in 1967, this 170 meter high (including antenna) tower was the tallest building in Sweden up until the year 2000. It is often depicted as part of the Stockholm skyline along with the Globe arena and the city hall.
To be honest, the building has a bit of a retro Soviet look to it these days and its location, on the outskirts of the city, make it a little problematic to get to. I wouldn't make a special trip just to the tower, but if you are in the area then it is worth the visit. For example, there are several museums and art galleries in the area as well as great nature walks (in the surrounding Djurgården city park) that can be combined with a visit to Kaknästornet. The tower has amazing views from the top... Stockholm to the west and south and the beginning of the archipelago to the east. The entrance fee is 45 SEK for adults and 20 SEK for children between 7 and 15. There is both a restaurant and a café/bar at the top. If you have a table reserved in the restaurant then there is no entrance fee. They also have a souvenir shop on the bottom level. The best way to get there is by taking either bus 69 or 69K from Norrmalmstorg.
When I was there it was late afternoon and the sun made it hard to take pictures of the city, so I concentrated on the views to the east instead! Pictured above is the entrance to Stockholm harbour with the quaint Fjäderholmarna Islands (beginning of the archipelago).
Email Post
Labels: Djurgården view