ABBA the Mueum has been in the works for years (rumours, change in venue, touring exhibition, etc;) so the opening on May 7th was greatly anticipated. You might wonder why I waited a couple of weeks to visit and report on such a popular new addition to Stockholm. Well, I wanted to let the opening hysteria die down a bit... plus, I was given a "special" tour by museum curator Ingmarie Halling (a perk of being the concierge at the Rival Hotel) which made the wait worthwhile. 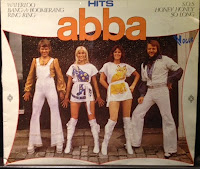 "Walk in, dance out" is the tag line for the new museum, dedicated to the Swedish pop super-group ABBA, and it doesn't disappoint! To be honest, I had some concerns beforehand that the museum would only be of interest to hardcore ABBA fans. But it really is a lot of fun and everyone will be able to enjoy it... whether you are 7 or 77, a fan or just have fond memories of their music.
Entrance to the museum is through the gift shop, which is reason enough to visit. ABBA memorbilia like t-shirts, tote bags, posters, pins, magnets, postcards and jewellery fill the shop and it was fun to browse. Be aware that the museum does not accept any cash... just credit or debit cards! The museum itself is located underground, two floors down to be exact. Visitors are first shuttled through a room where they are introduced to the band in the form of an IMAX type theatre and bombarded with images, music and sound bytes. I imagine that this type of entrance is designed to space visitors out... dividing them up into smaller groups.
Exiting the theatre, visitors move on into a room dedicated to the pre-ABBA careers of the four members. It is a nice window on Swedish music culture of the 1960's when folk and rock bands would tour the country and perform in folkparks. Moving on in the museum are rooms dedicated to the band's formation and early success in Eurovision. Visitors then get to see bits and pieces of the lives of the group members during ABBA's heyday. The museum accomplishes this by recreating rooms which were important to the group... like the recording studio, Björn's summer cottage, Agneta's kitchen, their dressing room when they were on tour and more.
Finally... the crown jewel of the museum (for many): the stage clothes! In a circular room, the clothes have been placed in curved cases in concentric circles with the outer walls covered with thousands of album covers from all over the world. The cases are quite narrow which means that you get very close to the clothes and can enjoy the amazing detail work. Even the most blasé visitors will recognize the outfits from their music videos and concert performances... very iconic!
The museum is very high-tech and interactive. Visitors get the opportunity to record a song, dance in a 70' discotheque, scroll through Björn's father's scrapbook (a treasure trove), be part of an ABBA video, perform on stage with the group (present in the form of holograms) and much more! Very hands-on and fun for the children as well.
After the band's heyday? The break-up of the band and their marriages follows of course, after which visitors exit through a corridor that gives a nod to the Mamma Mia musical. But that isn't the end of the experience! After leaving the museum, visitors enter the Swedish Music Hall of Fame. Swedish popular music is much, much more than ABBA and visitors get to take an interactive tour through the music catalogue of the past 80+ years... truly remarkable how such a small country (population wise) has left such a large imprint on world music.
The museum is located on the island of Djurgården and is very easy to get to from the Rival Hotel. There are regular ferries (Djurgårdsfärjan) which travel between Slussen, a 10 minute walk from the hotel, and Djurgården... and the trip takes just 9 minutes. Tickets for the museum cost 195 SEK (90 SEK for children 8 and younger) and can & should be purchased in advance on their website. While this may sound like a lot of money, remember that the museum is a very interactive, high-tech experience and you definitely get your money's worth. As I mentioned before, the museum accepts no cash. If you don't have a credit or debit card, the best option is to purchase the tickets at the central train station ticket counter... which accepts cash.