For years, most of the neighbourhood of Hornstull has been one big construction site. The majority of the construction is over and the area is emerging as one of Stockholm's new "in" areas. Located on the westerly tip of the island of Södermalm, the area has long been a transportation hub for western Stockholm with bridges connecting the island to Kungsholmen and the southern suburbs as well as tram, bus and subway stops. 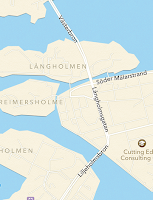 The island of Södermalm (also the location of the Rival Hotel) has for the past couple of centuries been the home of Stockholm's working class. Gentrification of the island over the recent 40-50 years has changed it into a chic area with boutiques, galleries, restaurants and cafés and the home of artists, bohemian culture and young up-and-comers. One of the most famous gentrified areas is SoFo (South of Folkungagatan)... and as SoFo has become slightly over-exploited (it is found in just about every tourist guide), Hornstull has developed into the place where young Stockholmers want to live, work & play. In fact, some people have taken to calling the neighbourhood NoHo (North of Hornstull).
So, what is new? The underground passageways connecting the subway station to street level have been refreshed, adding many new boutiques. In fact, the passageways also connect to a small shopping center with stores selling fashion (H&M among others), technical gadgets, books, flowers as well as a larger liquor store (Systembolaget) and grocery store. Probably the most obvious change is a new, three story, leaning glass building adjacent to the shopping center's street entrance. Housed within this building are two restaurants... Hornhuset and Trattoria Enzo's. There is even a rooftop terrace which should prove to be very popular during the summer.
As the area has increased in popularity, more and more restaurants have moved in over the past few years. Some well-known ones, representing a wide range of cuisines and price ranges, are Ho's, Ramblas, Linje 10, Judit & Bertil, Calexico's and Lasse i Parken. Cafés, always popular with Stockholmers, are in abundance! Another reason, as a tourist, you might visit Hornstull is its proximity to green areas. The small, leafy island of Långholmen is nearby... a great place to take a swim or to rent a kayak during the summer months. On the other side you have the park Tantolunden and the waterfront promenade Hornstulls Strand. Another fun thing to do is walk across the bridge Västerbron, which connects the area to Kungsholmen. Great views of the city!
There is still some minor construction going on (beautification of the sidewalks), but this is already a great place to visit. It is easy to get to from the Rival Hotel... just a 20 minute walk down the street Hornsgatan, or else two subway stops on the red line.
Email Post
Labels: restaurants shopping Södermalm SoFo tourist information 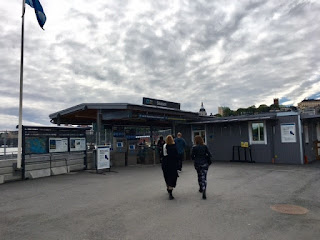 Djurgård Ferry- Best Way to Get to Djurgården!