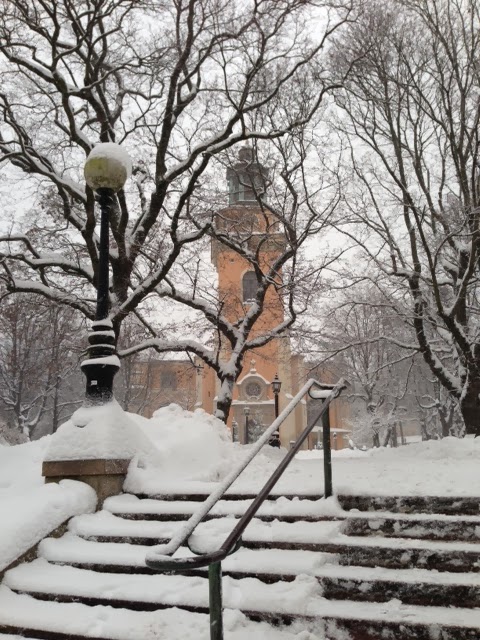 It has been a relatively warm winter so far... with no snow and temperatures well above freezing. Quite unusual! But winter (and the snow) has finally come to Stockholm. We had our first real snowfall this past weekend and the weather reports show more snow and continuing below freezing temperatures in the coming weeks.
This all means that the ski slopes around Stockholm can finally open for business! To give you an idea of how warm this winter has been... last year the ski slopes opened on December 13th. The Stockholm region has no mountains, so we are talking smaller slopes. But they still have lifts, multiple runs and the opportunity for the popular "after-ski". You can also rent ski and snowboard equipment there, so you don't have to worry about bringing it with you from home.
The closest slope to Stockholm is Hammarbybacken. In fact, it is so close (located in the southern suburbs) that you have great views of downtown Stockholm from the top. They are busy preparing the slope with snow cannons and plan to open on Saturday (Jan 18th). To get to Hammarbybacken from the Rival Hotel, it is only a 20 minute trip with the subway and street car (Tvärbanan) or by direct bus (#74). Other ski slopes in the Stockholm region that are planning on opening this coming weekend are Ekebyhovsbacken and Flottsbrobacken. These are, however, a bit further away than Hammarbybacken! Full list of nearby ski slopes.
Click here to read my article from last year (with more information).
Email Post
Labels: activity sport winter