Stockholm, with its acres of parkland, 57 bridges and 14 islands, is a great city to get around on a bicycle. In the warmer parts of the year, of course! The city has been very good at making sure the main streets all have marked bicycle lanes as well. While we have a relatively short bike season, it is a popular way to get around for both locals and tourists. 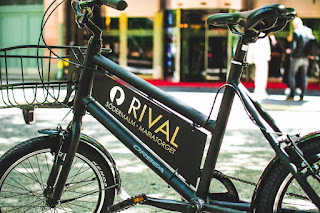 For many years, Stockholm had a bicycle system, with thousand of bikes to rent, all around the city. It was decided to change to a new system with electric bicycles, adding thousands of bikes and extending the amount of months they would be available to rent. Unfortunately, due to a contractual dispute, the new system is not up and running yet and the old system has been dismantled. So... no city bikes this year! The new system will be in place in January, 2020.
In the meantime, there are many other ways to rent bicycles in Stockholm! If you are staying at the Hotel Rival, we have four branded bikes for our hotel guests to rent for 195 SEK per day. Other places to rent bikes (by the hour or day) are Rent-a-Bike, Gamla Stan Cykel, Sjöcaféet, Vespa Stockholm (electric bikes) and Stockholm Adventures among others. Want to go on a guided bike tour? The aforementioned Stockholm Adventures as well as OurWay Tours, Stockholm Cykel and BikEnjoy (some of these companies offer bike rentals as well).
When you have your bike, just head out and enjoy the city. As I mentioned, there are marked bike paths on the major thoroughfares of the city if you just want to bike around between attractions, museums and stores. However, I recommend heading to the waterfronts and/or parks to enjoy the beauty of the city. Most of the islands in Stockholm have marked paths all along their waterfronts... like Södermalm, Kungsholmen and Djurgården. Djurgården, a national city park, is especially great to bike around. 13 more biking routes if you want to go a little further afield. 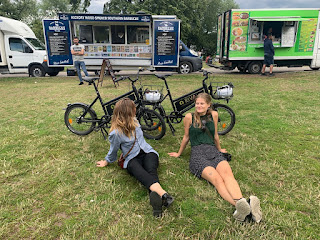 Two colleagues, Madeleine and Belinda, took our Rival bikes out the other day for a spin. The pictures in this article are from their afternoon. They biked up the street Hornsgatan to the Hornstull area and then over the bridge Västerbron to Kungsholmen. The Kungsholmen waterfront has a few great bars and restaurants on the water if you need to quench your thirst. They ended up at the famous landmark... Stockholm City Hall. They then headed out along Strandvägen to Djurgården and Rosendals Trädgård.
Sidenote: Stockholm, like most major cities, has been overrun with electric scooters. You will see people zipping around on these things on sidewalks, in bike lanes and parks. Nuisance, public menace or a fantastic way to get around? The jury is still out. At any rate, if you want to use these scooters, you have to download their app. These apps let you where the nearest scooter is, debits your credit card for usage and gives you more information. There are several companies, but Voi and Lime are two of the largest.
If you are going to be staying at the Hotel Rival, contact me directly if you want more information about renting our Rival bicycles when you are here or if you want more information about biking tours or where best to bike.