The Museum of Medieval Stockholm 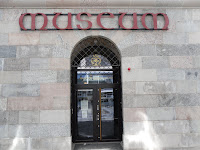 Medeltidsmuseet (Medieval Museum) recently opened again after being closed for a few years for renovation. The changes are really impressive! The museum is built around a section of the original defensive wall of the city and concentrates on Stockholm's history in the Middle-Ages. See through models how Stockholm grew and how people lived and worked in the city. Very interactive exhibitions... holograms, storyboards, relics and a mock set-up of a city street. Great for kids! During this summer they have an exhibition of Birger Jarl, the founder of Stockholm, celebrating his 800th birthday. They have even reconstructed how he probably looked after a recent excavation of his grave.

And most importantly... No entrance fee!

Very centrally located, though easily overlooked. It is found under the bridge connecting the Palace with Gustaf Adolf's Square, directly across from the Parliament building.
Email Post
Labels: history museum