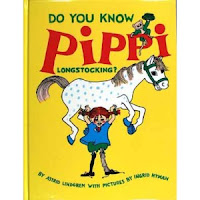 Do you recognize the young lady to the left? Chances are that you do. Pippi Longstocking is one of the most beloved fictional characters in the world. But did you know that she is from Sweden? She is the creation of Swedish author Astrid Lindgren. The original book (Pippi Långstrump) was first published in 1945 and Time Magazine has named the book as one of the top 100 most influential novels of all time. Pretty good for a little red-haired girl with pigtails! Astrid Lindgren wrote other books besides the P

ippi-series... other well-known characters include the Brothers Lionheart, Karlsson-on-the-Roof, Emil of Lönneberga and the Six Bullerby Children. She has sold approximately 145 million books worldwide and is the world's 25th most translated author! The Pippi series alone have been translated into 64 languages so far...
Astrid, one of the most loved Swedes in history, has near saint status in her home country. Her funeral in 2002 was described as coming as close to a state funeral as possible. Around 100,000 Swedes lined the streets of Stockholm to follow her funeral procession and the funeral itself was attended by the Prime Minister, leading Swedish politicians and the royal family.
Email Post
Labels: litterature trivia