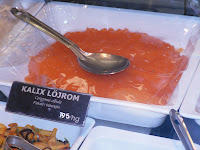 Autumn is my favorite season in Sweden for many reasons. I love the crispness in the air and the changing colors of the leaves, but the main reason is the abundance of fresh produce that show up in the supermarkets and restaurant menus. As a visitor, this is the perfect opportunity for you you to sample tastes that are truly Swedish... and when they are most fresh! When perusing menus in restaurants this season, keep your eyes open for the following:

The pictures were taken at the outdoor/indoor market at Hötorget, an experience in itself!